Themed “A Summer in Spain,” the 11th annual West 18th Street Fashion Show was an eclectic mix of artistic endeavor and schticky accessories.  Of the 18 designers, about half showed wearable creations, a few truly innovative collections, and an assortment of odd choices and lackluster finishes.

I was both intrigued and annoyed by the model selection, since the producers smartly represented many beautiful body types, yet in some cases dressed these various types with unflattering cuts in a discouraging mismash.  There was also a prevelance of amatuerism in the movement and posing, as well as poor fabric choices, unfinished hems and bulky seams.

My less than stellar photography skills managed to catch a few good shots, though as the sun went down this became increasingly difficult.  Since I was an observer and not a journalist, it didn’t matter in the end.

The opening performance was by flamenco dancer Zhanna Sarapova.  I’ve seen her performances before, mostly on small wooden stages in the contained spaces of cafes.  Recreating her choreography to accomodate the length of the runway must have been a challenge, but she performed with her typical stylized movement, intricate foot work and elaborate gesture in an elegant performance. 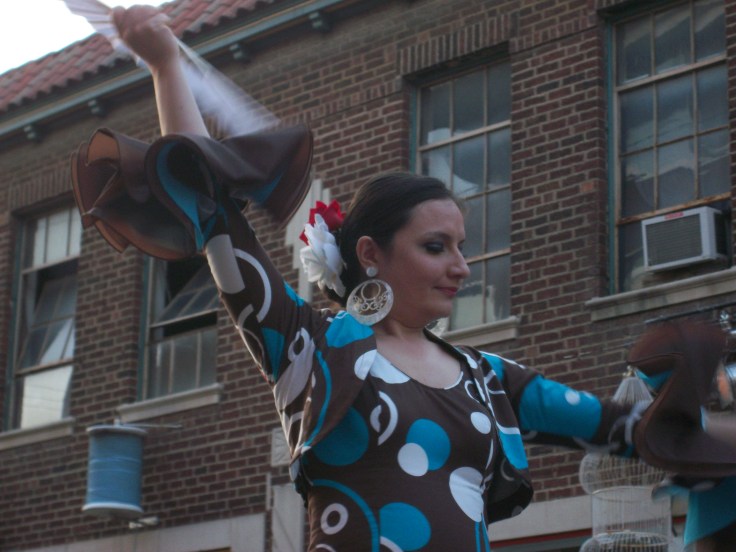 The designers tackled the thematic “Spanish” elements in a variety of ways, some with an insightful and creative work, others less so.  Beach wear factored strongly.  There were a few who ended up with Ren-fairre styled Gyspy costumes, another with ComicCon warrior formal wear.  The less literal instances worked better artistically, though I was impressed by the bull horn hairstyles [first picture] used in Dominique Karwoski and Steven Chau’s show.

Ari Fish’s design, below, was more sculputal and festive than wearable fashion.  Instead of the traditional five outfitted models entering one at a time, her show was a Carnival-esque, drum accompanied parade in neon, insect-like costumes.  The Mardi Gras influence was encouraged by their whistles and bells, as well as artist David Ford rattling beads and blowing his own whistle from his second story studio window overlooking the festivities.

There were few beautiful options.  The most elegant design came from Cheryl Eve Acosta and Nicky Janzen with these intricately cut and shaped breastplates, lending a certain mermaid flair to the terretial event.  Some of the designers went with an Ibizan look, beachy, summery, fun, but this was by far the best example of beautiful and romantic.

One look that was interesting yet seemed entirely out of places was the fantastic white wool creations by Katie Coble and Jennifer Hunt.  The models needed more practice when revealing the brightly patterned surprises incorporated into the pieces, along with the reshaping of their outfits.  But creatively, these were astounding: white, fresh, winged sculptures. 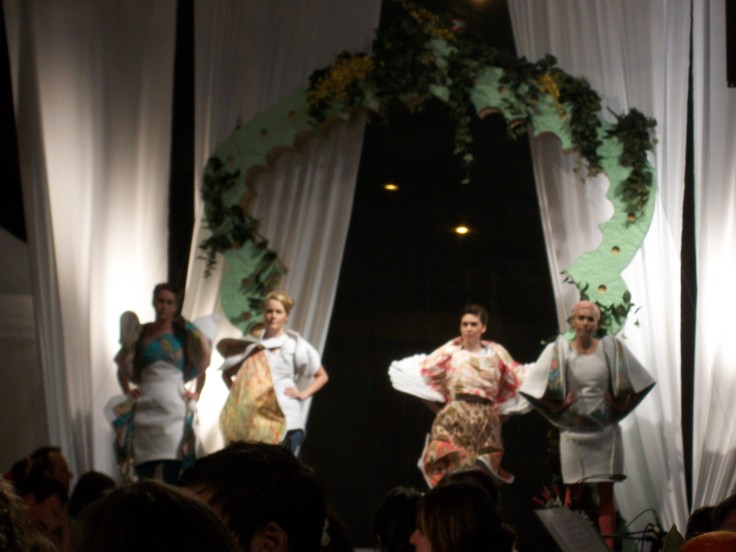 Elegant selections from Birdie’s Panties rounded out the evening as a sexy send-off. The added touch of a gorgeous man displaying feminine sleepwear was a revealing and inspired quirk.