I have a few additional thoughts regarding “America: Now and Here”.  I’ll admit that I never gave the visual art a fair shake, focusing more on the events, thinking I’d be back
soon and check out what’s what.  As such the various prints, paints, sculpture and collages worked more as backdrop, then as cultural or visual stimuli for dialogue.  The best opportunity for me was during the intermission of the Story Slam, but by then the auxiliary galleries were shutting down and only the main and lower spaces were available to peruse.

Art, at least to the uninitiated, is above all subjective.  A pretty simple “I like it”
or “I don’t like it” and the artistic judgment has been made and merit assessed.  Of course, to those in the business of creating, promoting and examining art (in all its various forms) there are much broader issues: is it relevant, does it add or detract to what’s come before,
is it marketable, is it individual, is there a voice, does it work, does it contribute?

In the lower room, a hollowed out bomb shelter-esque space, there was an odd assortment of pieces set up in a bit of a hodgepodge.  With such a diverse starting point for the show, which ideally encompassed every aspect of the current American experience, a miscellany is to be expected. Nevertheless, this basement room seemed exceptionally disjunctive.

But, despite the orc-like being rising from an oil drum or the cut cardboard-and-glitter wall sculpture or the miniature Laurie Anderson “holograph” storytelling projected into a dark corner, one piece did give me pause.  At the end of a series of red, white and blue
moving pallets with large helium filled, message emblazoned balloons attached to them was, adhered directly to the floor, a small square of tape roughly 1’ x 1’ with another taped piece in the center.

It took me a minute to realize it wasn’t part of the exhibition.  Or even art.

What it was was a little safety measure – a neon bright warning around a tiny bit of pipe that stuck out from the ground.  But situated within the melee of disparate pieces,
practically centered at the finale of the neighboring piece, it shocked me more
to realize that piece was not a piece, than to think I’d made such a glaring
mental error. 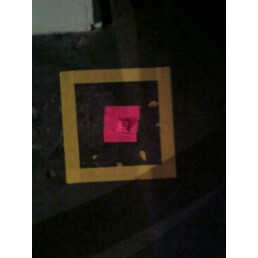 Frankly, I thought it was kind of cool looking.

La Esquina, an art and performance space on the Boulevard, hosted a series of events celebrating the surrounding neighborhood – primarily an artist and Hispanic influenced area west of the Crossroads District.  For June’s First Friday, they had a beer tasting.  One of the Boulevard brewmasters had been asked to create a special brew for the event, a portrait of the West Side.  A home-brewer had made two “beer portraits” of well-known local individuals.

Since only enough beer had been brewed for the event, I risked the health of my unborn child for a few sips, though I only tried two of the three.  One was hoppy and floral, the
other dark and chocolaty.  Each had enough to distinguish it from other brews, though nothing was very “out there”.

Beer tasting, especially these small, select batches, is very similar to gallery showing.  Whether you’re a connoisseur or not, you’ll have an opinion about what you just put in
your mouth.

I enjoy going to museums and art galleries, visiting people’s homes and scouring the internet for work that – in the truest subjectivity – “speaks to me”.  Especially regarding the
internet, it’s nearly impossible to experience the work, as the color, lighting, size and texture are completely unrelatable.  And in someone’s home, it’s perhaps best not to judge the items they’ve chosen to display, as matters of taste and sentimental value can vary widely even amongst the most savvy and likeminded.

But I make instant judgments anyway, not as a collector concerned with the value of the work, but whether I find a piece livable and enjoyable.  We have family photos
displayed through our house, pictures from trips, and small prints gathered from various stages in our lives.  Seeing those things displayed, and displaying them well, makes me happy.  Visual work is not for me necessarily based on the criteria I listed above (I’m no Herb and Dorothy), but on whether I would have it in my home.

Case in point, one of my favorite pieces displayed at the Kemper Museum of Modern Art can be found in the dining space for Café Sebastianne. It is (probably more complicated, but essentially) a sheet of plywood, painted orange, with a hole burned through it.  And I love it.  I would hang it in my house.  But I can dually see someone looking at it
and thinking “that isn’t art”.

I don’t know what the process was, either mentally or physically.  I know nothing about the artist.  I like to imagine a gallery opening with rafts of similar work – brightly painted plywood with burn marks, highlighting the vagaries of fire’s chance pattern.  It’s
usually enlightening to talk with an artist about their thoughts and inspirations, how they crafted their concepts and ideas, fulfilled their visions.  It would be hard not to see
significance once you understand a work’s background.  But seeing a completely disembodied work and having it resonate – that seems to me to be the ultimate goal.  Then again, that could just be highlighting my lack of sophistication.

Another example of my lack thereof is that I look at a piece like Orange and I think “I could do that.”  And really, given a blow torch and enough time to tackle the project and a similar piece would be in my house in the near future.  But is a handyman-special
reproduction really the best tribute to an artist’s work?

A few hundred years ago, maybe.  Student-artists cut their teeth on creating
reproductions and copies of famous work.  They apprenticed with master-artists in their workshops, roughing out portraits and landscapes from their teachers’ sketches, and then the teachers came back and filled in the final details.

Does that sort of scholarship still exist?  In music, similar methods were employed as students hand copied Bach fugues and studied scores of the masters.  Some do that today, but there is more often a mark of individuality required.  Don’t copy, ever.  And if you do, hide the body.

This veered off course a bit, but my point is this: subjectivity is great.  Creations should get different reactions from different people.  (Even God didn’t get five stars from everybody.) Even a taped shape on the floor should raise an eyebrow or two.  If some work becomes incredible marketable, I would worry about its cultural worth.

And with subjectivity comes dialogue.  To reiterate, one of the tenets of “America: Now and Here” was to create a conversation.  The only way to really ferret out what one thinks is to discuss it, write out thoughts, and mix with other people’s thoughts and insights.  I think this exhibition achieved that, but this goal should extend to more than just those who came to it.  The conversation should extend to anyone with an opinion and is willing to share.

Because otherwise, it doesn’t matter if it’s art or not.