Of all the disrespectful, small minded…

I won’t even link to community engagement editor Derek Donovan’s “opinion piece,” so here’s a screen shot of this appalling tweet.

Is this what The Star’s arts coverage looks like, now? Geesh.

The article has nothing to do, really, with The Kansas City Symphony’s performance, other than it is scheduled for Monday’s game. There is no story here, other than to question what it is about America that we can’t handle someone’s *extremely* *American* peaceful protest without 1) acknowledging the need to heal a culture of systematic racism and 2) wondering who, really, is playing “the game we Americans should all abstain from.”

Sounds high-minded, but baby, it ain’t.

Yes, The Star is reducing its already insufficient arts coverage, again, and headlines like that will negatively sway the general reader from the wonderful, life-changing work the Kansas City Symphony is attempting, without offering rebuttal. So thanks for that, Donovan.

Maybe you think this doesn’t matter, but kids I tell you it does, especially in a community which touts its vibrant arts culture as an economic driver. The Star produces seemingly endless sports coverage from multiple perspectives, with pre-, post- and off season discussions, real time updates, and all manner of speculative “reportage,”  but it seems the arts only get covered in the current climate if there’s a sports angle. Tim Finn’s interview with Melissa Etheridge talked about performing the anthem for the Chiefs, Bill Brownlee gave KCSymphony (with Melissa Etheridge) its only review yet this season, with The Star deciding to skip the KCSymphony’s season opener and subsequent presentations. The Pitch ran a story comparing the excitement of a Chiefs game with the thrill of a live symphony.

I don’t know the politics of The Kansas City Symphony, its leadership, its members, or its individual patrons. I hazard to guess that the son of social change advocate Isaac Stern is not a huge fan of the current administration’s policies, but I do not know that. I’m not saying he is or is not, as we have never discussed anything but music, but I’m also not going to throw anyone under the clickbait bus to insinuate one way or another an entire organization’s political identity.

I mean, what is this? 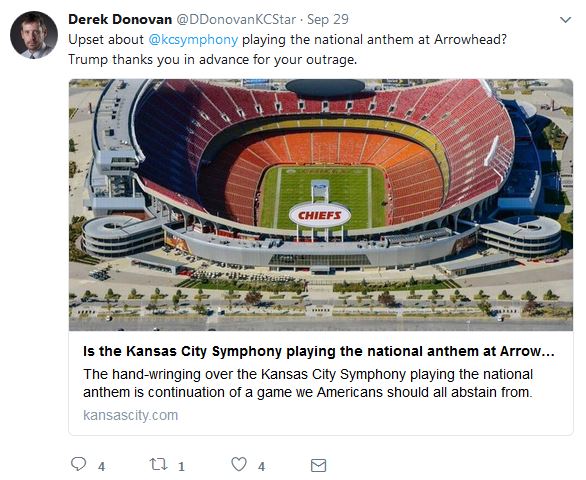 If anything, this willingness by The Kansas City Star to besmirch The Kansas City Symphony is an endorsement of Trumpism–in that misguided, misleading, disrespectful tweets are in keeping with the Trump brand.

The Kansas City Symphony is committed to uniting people with music, not dividing. Their mission is to offer high quality music to as many people, in as many places, as their budget and time will allow. They are active in the community, they offer free concerts throughout their season and reduced tickets for students, and, while conservative in their programming, KCSymphony is a socially aware and healthy organization which, in their mission statement, values courtesy (not something the current administration exhibits). Did I say KCS could do better? Yes. We can all always do better.

Play, or do not play, the anthem. Stand, or do not stand. Heck, now players can’t even kneel in prayer before the anthem without getting booed by one group or another. It is not unAmerican to peacefully protest a culture of racism via the platform you are provided. Nor is it disrespectful to veterans, nor to this hodgepodge of a song, nor to the garishly colored flag.

You know what is disrespectful to the flag? All the gimcrack-garbage Made In China “Stars and Stripes” decorative knick-knacks you find in every store between March and July. Or underwear with a flag decoration. Sweet Betsy Ross, people. That ain’t right.

You know what would be respectful? To take the flag and wrap it protectively around those who suffer, to help where help is needed, to build trust through selfless acts, to praise the good work of those doing it, and lend a generous hand to those with whom one disagrees.

And have you ever heard the anthem performed? If anything, The Kansas City Symphony will bring more respect to their rendition than the forgotten lyrics/useless melisma/can’t stay in key versions of most second tier pop stars.

It is not an endorsement of Trumpism to perform the anthem. It is within the full rights of any American to perform the anthem, as well as to abstain from the ritual when the situation calls for it. It is NOT within the purview of a journalist to use bias and triggering language to generate internet traffic and damage the public opinion of an organization.

Play on, Kansas City Symphony. Whatever your politics, it is still considered an honor to be asked to perform the National Anthem at a nationally televised event and members can participate or not as their ethics and conscience allow. Make our city and country proud of quality performance in an unkind atmosphere.

Stand (metaphorically, if you wish) for the arts.

Update Monday, Oct 2: I learned this was written in response to a Letter to the Editor from an upset Symphony patron. The letter (12A) and the op-ed (13A) both ran in print on Saturday, and it is far more clear that Donovan’s issue is not with KCS’ performance of the anthem, but the politics which instigated the letter-writer’s grievance. Since the letter is not mentioned in the op-ed online, there is no context for it and the various online headlines/tweets intentionally paint the orchestra in a bad light. The tone of the op-ed in print is much different than the tone generated by the oft-retweeted clickbait, and I continue to reject this.