Wouldn’t it be great if someone came in from off stage and brought you up to speed every once in a while in your own life, highlighting the pertinent points? I get so caught up in day to day ephemera that I lose my grip on the plot, the characters, and the over-arching themes, and can’t help but stumble into life’s tired, tried clichés.

Art reflects life, but it isn’t life. That’s why it’s so darn tidy and succinct. Art is complete at some point, a product, observable.

Life is, of course, a never-ending task. It takes all of our energy and rarely any of our focus.

One representation of this never-endingness is the legend of the Danaids. Aeschylus’ play “The Suppliant Maidens” tells one part of their fated story.

This was the play put on as the Gorilla Theater’s 21st annual summer solstice sunrise Greek show. It’s an all-volunteer production and kudos to artistic director David Brisco Luby, who assembles a pretty commendable cast each and every year.

My family went to this morning’s 7:30am performance (and I do appreciate this loose adaption of “sunrise”). It was performed on the south steps of the Nelson-Atkins Museum of Art, with the audience in blankets and chairs around Rodin’s The Thinker, sipping their travel mugs of coffee.

The play follows the story of the chorus of maidens, the daughters of Danaüs, who have fled forced marriages and are seeking asylum in Argos. Besides a few choreographed moments and a brief chase, most of the action is in fact declamation, as the history, battle, and resolution are orated.

I’ll admit that much of the plot went unheeded, since I couldn’t concentrate on the language. Bringing a one-year-old to any event typically means that you remember what the one-year-old did, not what happened in the environment around you. We spent most of the play making sure the one-year-old didn’t disturb the other audience members by plying him with Cheerios and letting him destroy the program, so the performance itself was mostly lost on me. 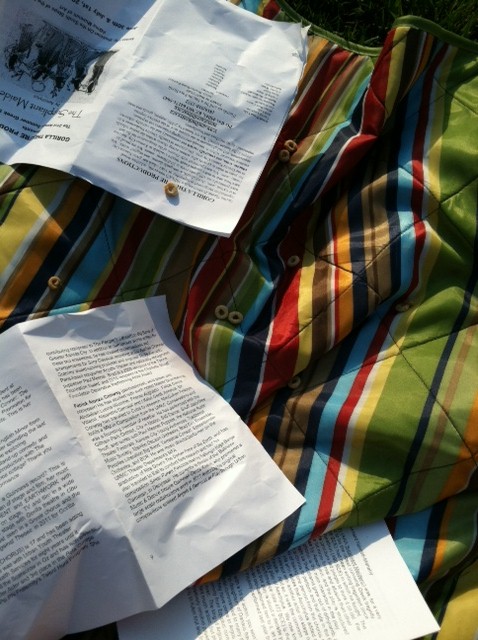 However, there were quite a few moments that distracted me from my distraction, as it were, and made this another memorable event.

The choreography of the chorus, by Latra Wilson, was effective and relatively simple, a kind consideration since the women were talking the whole time and walking up and down the steps. During one segment, the sun burst out of the morning’s gentle clouds and made the women’s jeweled lamé wristlets sparkle as they circled ‘round one of the sparse set’s sculptures.

The construction of the play is also of interest because the chorus is the protagonist. Imagine if there had been fifty women proclaiming from the steps of the Nelson in unison, or jubilantly ululating when they are accepted into the Argive fold. Even with seven women, their shrieky shouts where the only thing that tore Jack’s attention from his container of Cheerios.

And unrelated to the play, but endearing nonetheless, was watching an audience member (who happens to be our former neighbor) chase her dog across the front of the steps during Pelasgus’ speech. (I guess if you name your pet Jane Russell, she’s bound to try and steal the limelight.)

But that’s yet another reason why these events are enjoyable to attend and are the sort of thing we seek out as a family. It’s a special outing, but casual; a part of our heritage, but also an ongoing artistic statement. And watching Jack stop his wiggling to clap every time the music stopped just doesn’t get old. It is part of my own, much appreciated, never-ending story.

Mark my words: we’re training one of the best audience members of the 21st century.